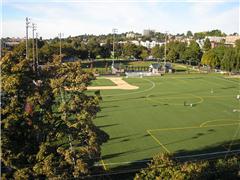 Originally named Lincoln Park until the 1920s, the site was finally given a new name, Cal Anderson Park, when it was recently transformed. The name Lincoln Park had been given to a large shoreline park in West Seattle recommended in the Olmsted 1908 supplementary park plan.

John Charles Olmsted first designed historic Lincoln Park in 1904 and finalized the layout with the ballfield in 1907. Like Volunteer and Jefferson Park designs which followed, the landscape incorporated a city reservoir. The park also provided ballfields (Bobby Morris Playfield), a shelter house with pergolas, lawns, paths and shrub beds to serve the already populous surrounding neighborhood. As the park aged, the facilities and good bones were overshadowed by deterioration and inhospitable activity. Neighbors and Olmsted advocates joined together in the 1990s to begin restoration efforts that would continue for another twelve years.

A state requirement to cover open water reservoirs provided the impetus for Seattle Public Utilities to facilitate design of the 'new' four-acre open space that spans the lidded reservoir. Over nine years, the design team sought to balance and integrate requirements and goals of numerous agencies, individuals and community groups: safety, accessibility, beauty, respecting the site’s history, and retaining the presence of water. The 11-acre site became a designated Seattle landmark in 1998. The redesign maintains the reservoir Gatehouse, the central arc of hedge maples and portions of the old reservoir’s parapet wall. The water feature and reflecting pool ensures that water remains an integral part of the landscape.

The designers respected the historic context and worked in the spirit of the original Olmsted plan. However, much of what people see and experience today (water feature, promenade, grading at the reservoir, expanded path network, play area, shelterhouse, neighborhood entries, lights, paving, steps, seating, integration of buried reservoir operations) is contemporary. The team thought of it as a spirited collaboration with the community and Olmsted Brothers, although separated from them by 100 years.

The rebirth of Cal Anderson Park and associated revitalization of the surrounding neighborhood means the park has become both a crossroads and a destination. The spacious design accommodates a wide variety of uses and users. Even while it creates areas for new uses, the overall effect is timeless, an urban park that honors its historic legacy, embodies its utilitarian function and meets the needs of the community it will serve for the next 100 years. It is a much-needed oasis of green space in a densely populated neighborhood where a diverse community can come together. That said, design cannot address all societal issues. Challenges continue and improvements and adjustments are underway to improve park safety.

No documents available at this time.