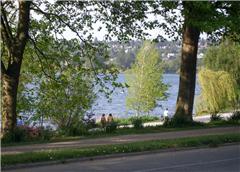 At the end of the last Ice Age, what is today Green Lake was a geological remnant of glacial Lake Russell, a giant lake formed when melt-water from melting glaciers sitting on top of Seattle cut drainage ravines through new glacial deposits. Lake Russell disappeared when the Ice Sheet retreated north of the Straits of Juan de Fuca, but various features remained, including the Green Lake drainage basin, which for thousands of years emptied through the Ravenna ravine into Lake Washington.

The Lake itself was named in 1855 by a US Geological surveyor who, arriving at the height of algal bloom, termed it “a tired post-glacial lake”. In 1869, Erhart Seifried, known as Greenlake John, staked a 132-acre homestead claim on the northeast shore, becoming the first white settler in the area. Homesteading continued and turned into development of suburban lots. In 1891 the Green Lake neighborhood was annexed by the City of Seattle.

Though Green Lake was included in the 1903 Olmsted Parks and Boulevards Plan, at the time the lake itself was still owned by the State of Washington and much of the surrounding land was owned by developers. In 1905 the State deeded it to the City.

At the south end of Greenlake was a bathing beach, boat house, and hunting lodge, developed by Guy Phinney who owned the property he named Woodland Park (see job 02694) to the south and west of the lake. Phinney also created picnic grounds and two ballfields. At the time John Charles Olmsted came to town, the lake came as far south as 54th Avenue.

In addition to Phinney’s trolley line along Fremont Avenue, another trolley had been built by realtor W. D. Wood and Dr. Kilbourne to connect Seattle with the east and north side of Green Lake. By 1904 it was extended on around the lake and through Woodland Park on a trestle to Woodland Park Avenue and hence to 34th and to Fremont Bridge. A bulkhead still remains near 59th and Aurora.

The Olmsted 1903 Parks and Boulevards Plan envisioned a 20-mile-long system of scenic boulevards that would tie together various parks and playfields across the city. In the report, the Olmsted Brothers called for a boulevard extending north from the University to Ravenna Park and then turning west toward Green Lake. The Olmsted concept was that Ravenna Boulevard would be created after moving the existing trolley line south of the crest of the ravine, opening up a space for the boulevard to follow both sides of the ravine. As the land around Green Lake was already being platted, the report did allow that if there was insufficient land available due to development around Green Lake, the lake could be lowered four feet and the outflow creek could be diverted into a pipe.

By 1903, settlement around the lake was so extensive that there was little land left for a park at the edge of the lake. Olmsted's recommended 4-foot lowering would have maintained the function of the outflow creek along Ravenna Boulevard. However, the City chose to lower Green Lake 7 feet, which effectively negated the option of retaining the creek, but had the benefit of expanding the park by 100 acres. The plan envisioned a new formal boulevard along Ravenna Creek's former path connecting to Cowen Park (job 02707) where Ravenna Creek imerges.

The Olmsted plan for Green Lake called for building ball fields on the east edge of the lake, expanding the park with fill in that area by 40 acres. However all of the Green Lake business owners protested that amount of expansion to the city council, prompting the Olmsted Brothers to reduce the filled area in their 1911 plan.