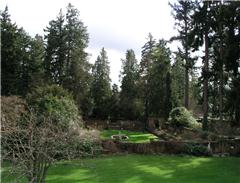 Among all Olmsted-designed estates, “Thornewood” is outstanding for its fame, beauty and integration of architecture with its stunning Pacific Northwest setting. The vast property included native forest, lake shore and views of Mt. Rainier, all of which were exploited in siting the mansion, designing its formal elements, and enhancing its natural surroundings.

Among all Olmsted-designed estates, “Thornewood” is outstanding for its fame, beauty and integration of architecture with its stunning Pacific Northwest setting. The vast property included native forest, lake shore and views of Mt. Rainier, all of which were exploited in siting the mansion, designing its formal elements, and enhancing its natural surroundings.

“Thornewood” was built for Chester Thorne, founder of the Port of Tacoma, and his wife Anna between 1909 and 1912. Just 13 miles south of the city on America Lake, it was considered a country house; Thorne described the site's potential to Olmsted Brothers, saying he and Mrs. Thorne "think you have an opportunity to make a very beautiful small place.” [03494_LOC_1909-09-30_Thorne to OB]. The mansion built within Olmsted’s landscape was Spokane architect Kirtland Cutter’s Tudor masterpiece, one of several residential collaborations between the firms.

Thorne first approached John Olmsted to develop a General Plan and Grading Plan for the estate in 1908, well before engaging Cutter to design structures for his property. While Cutter sometimes chafed at a landscape architect’s lead, overall the designers, Thornes and supervising engineer Alex MacDougall worked successfully with the Olmsted Brothers team, including J.C.Olmsted, J.F. Dawson, and Leonard Macumber. Olmsted worked to influence the placement of the house to “properly relate the house to views from it” [03494_LOC_1909-08-31_JCO to C. Thorne], believing views OF the house carried far less weight.

“Thornewood” embodied the Olmsted Brothers’ passion for the Puget Sound region’s water and mountain views and lush native vegetation, against which they created counterpoints with highly structured design features. Formal and wild extremes were carefully interwoven to maximize landscape drama and beauty. Olmsted meticulously organized sequences of movement and vistas. His treatment of the main approach is a case in point, beginning at the road as a straight, tree-lined allee, curving through strategically-thinned forest that obscured views ahead, and emerging across a sweep of lawn to the house’s grand forecourt.

The lake was hidden from this formal entry, revealed gradually on the opposite side through groves of trees amid turf swaths leading to the shore. The water’s edge itself was framed by trees, and adjacent peripheries developed as “Open Wood”, “Rock Garden” and a “Wild Garden” intended to “harmonize with the wild woods and yet be a little different from the undergrowth elsewhere….secluded rambling paths with the growth between them high enough to screen the more distant views…, making this a mysterious, mazeline ramble.” [03494_1908-04-30_JCO to Anna Thorne]

Away from the water Olmsted designed a formal perennial garden, water garden, cutting and vegetable gardens, stable and tennis courts. He enriched the native forest understory to insure perimeter screening.

Laid out oblique to the house, the walled garden captures an axial view to Mt. Rainier from the master bedroom, reflecting the forethought with which John Charles Olmsted positioned the house. He wrote to associate Dawson, “It would seem to me that in such a wild surrounding that it would be well to introduce a distinctively different note rather than continue the character of the surrounding woods.” [03494_LOC_1908-11-14_JCO to JFD] , In 1926, the Garden Club of America named it the “most beautiful formal gardens in America.” (Tacoma News-Tribune 1988-07-13)

A 1920 description of the garden attests to Olmsted’s successfully executed vision: “Here is a walled garden within a greater garden, wherein the designer has skilfully brought into the realm a sense of grandeur far beyond the limitations of its boundary…secured by skilful cutting of a few trees and adjustment elsewhere. The scene resembles the raising of a curtain upon a wondrous landscape in which the mountain accepts naturally the proud position of honor.” (Louise Johnson, The House Beautiful, 1920-07)

Today a three acre vestige of the original hundred acre estate remains, with the house, its immediate surroundings, and the walled perennial garden intact. Now a luxury bed and breakfast inn, landscape access is limited to guests and special events.