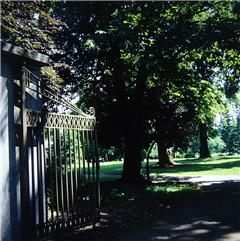 The 393-acre J.W. Clise estate, Willowmoor Farm, was a successful dairy, cattle and horse breeding operation in Redmond. In 1909 the Olmsted Brothers firm prepared a planting plan describing trees and masses of flowering shrubs that framed expansive lawns, plus formal gardens and a tiled bird pond. The plan was not fully implemented; today it is Marymoor Park.

The 393-acre J.W. Clise estate, Willowmoor Farm, was a successful dairy, cattle and horse breeding operation in Redmond. In 1909 the Olmsted Brothers firm prepared a planting plan describing masses of flowering shrubs and trees that framed an expansive lawn, plus formal gardens and a tiled bird pond. The plan was not fully implemented. Today the property is Marymoor Park.

Set on the east side of the Sammamish River in what is now Redmond, WA, the property started as 73 acres in 1904 and in two years was expanded to 393 acres and 28 structures that included a large home, a dovecote, a windmill, several barns and machine shops, a narrow-gauge railway, a gate-lodge, a boathouse, a large conservatory/greenhouse and a “village” for housing the farm’s workers.

The Clises hired the Olmsted Brothers firm in 1908 to prepare the planting plan for the area extending from the property entrance up to and surrounding the main house. The firm delivered a plan to the Clises in 1909, describing the plantings framing the lawn and the formal gardens adjacent to the residence. The Olmsted plan was not fully implemented. It is believed that the tree plantings may have been started but the shrub plantings were not installed. Vines that were installed on a pergola and a rose garden, described by visitor, may have been part of the planting plan. In 1910, the ship canal connecting Lake Sammamish to Lake Washington was constructed and lowered the level of the Sammamish River by 15 feet, once again expanding the acreage of the farm.

The Clises moved to California in 1917 and subsequently sold the property in 1921. Farming continued and the property was re-named "Marymoor" in 1941. In 1958–1966, under the Sammamish River Flood Control Program, the river in the area of the park was straightened. In 1959, investment firm Allison and Lean purchased the land for residential development. King County voters passed a bond to purchase the property and, in 1963, Marymoor become King County’s first park. For many years, the residence housed Marymoor Museum, which showcased the historic development of the Eastside (the region on the east side of Lake Washington. The area around the homestead is now called the Farm Historic District of Marymoor Park. In 1970, after extensive excavations along the river proved native inhabitants had used the site more than 6,000 years ago, the site was placed on the National Register of Historic Places as the Marymoor Prehistoric Indian Site. In 1973, the Clise home was placed on the National Register as well. In 1982, Willowmoor Farm was named a King County Landmark and the mansion and grounds are currently used as an event venue.