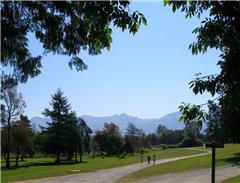 The Olmsted Brothers firm master-planned and landscaped this unique, 1,086-acre site, which integrated mental health facilities with farmland on a massive scale. Patients worked the land in their occupational therapy, producing food that sustained several state institutions. Walking trails wind through expansive grounds that once included a dairy, poultry, orchard and more.

The Olmsted Brothers firm master-planned and landscaped this unique, 1,086-acre site, which integrated mental health facilities with farmland on a massive scale. Patients worked the land in their occupational therapy, producing food that sustained several state institutions. Walking trails wind through expansive grounds that once included a dairy, poultry, orchard and more.

The site of Washington State Hospital, also known as Northern State Hospital (NSH), is a rare gem—the Olmsted Brothers’ comprehensive planning on this massive scale property merged institutional mental health care and full-scale institutional farming operations into a functioning, landscaped whole. The firm prepared the master plan and landscaping for the entire site, which included not only core hospital buildings, but also the dairy, piggery, poultry, and associated farming operations and orchards. In June 1910, State Board of Control member E.D. Cowen reached out to John Charles Olmsted to advise him of the pending master planning work for NSH, hoping to engage the firm’s services. Though other companies also applied for the job, an earlier Olmsted design for a veterans’ home at Port Orchard won over the board, which was responsible for the operation and development of state institutions.

This campus represents the state’s earliest and largest institutional planning effort and is a remarkable example of master planning merging health care and agriculture. The Olmsted Brother’s effort contributed to the practical workings of the site and the effectiveness of the institution’s care and treatment of patients. John Charles Olmsted and James Frederick Dawson’s involvement in the planning and landscaping extended from 1910 through 1919. Olmsted signed the overall planning and layout plans, and design of the site occurred during his later years. The project represented a significant work of Dawson, who signed his approval on the majority of the planting plans. Drawing dates range from 1912 through 1919 and during NSH’s formative years, the height of construction activity on the site, work remained under the competent direction of one superintendent, Dr. J.W. Doughty. Both of the principal contributing architects also worked on the site during the period of Olmsted involvement and consequently the majority of the Olmsted plan was implemented.

The 1,086-acre master planned site layers historic land uses and activities with an extensive set of historic buildings, structures and landscape. These activities encompass a broad time period from the first land purchase in 1909 through the institution’s closure in 1973. The role of occupational therapy in the institution left an indelible mark upon the landscape and was a prime factor in the Olmsted’s master plan. This process was integral to patient treatment at the hospital, but had an influence well beyond the institution. The farming operations that sustained the hospital population also shaped regional dairy and farming practices that have since assumed a defining role in the identity of the Skagit Valley. Nationwide, occupational therapy is one of the longer chapters (from the 1700s through the 1950s) in the development of psychiatric treatment and care. Today, the site of Northern State Hospital presents a unique blend of closed campus and open public areas, enabling interpretation of the role of occupational therapy in Washington’s institutional care.

Since the hospital closed, Washington State has been working on identifying new uses for the large site. About 700 acres of farmlands have been transferred to Skagit County for habitat improvement and recreational use. and the Port of Skagit County is to buy the remaining 240 acres of the main campus with the intention of creating a "clean technology campus."